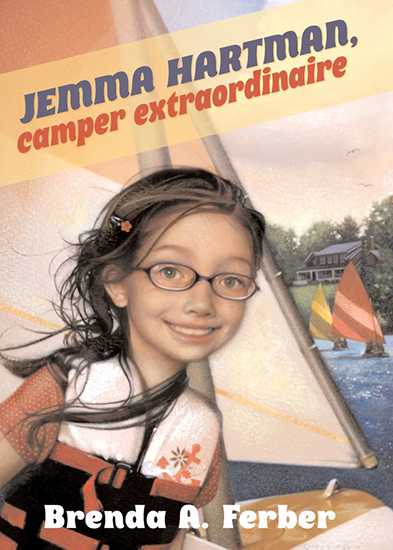 Jemma Hartman knows that her first summer at beautiful Camp Star Lake is going to be amazing. There will be swimming, sailing, and overnight trips—not to mention her best friend, Tammy, who moved away a year ago. But when Tammy’s cousin, Brooke, decides to come to camp as well, Jemma’s perfect summer starts to crumble.

Brooke never laughs at Jemma’s jokes, and she thinks she rules the cabin. She even convinces Tammy to be her sailing partner, sticking Jemma with the camp weirdo. Jemma just can’t understand why Tammy wants to spend all her time with Brooke. What ever happened to the best friends forever who planned on marrying twin brothers and raising their kids together? And is it really possible to make new friends but keep the old, like the song says, or does Jemma simply need to let go?

Brenda A. Ferber’s second novel is a tender and endearing look at friendships lost and found.

Read an excerptQ&A: Behind the bookWatch the book trailersRead discussion questions

Ferber has drawn a realistic main character… The plot moves along swiftly, and Jemma’s first-person narrative rings true, as do the issues and the camp experience.
—School Library Journal
For all the tweens who believe in BFF but find out, to their great disappointment, that it isn’t for everyone, this is the book for them.
—Kirkus
Ferber has a fine ear for preteen dialogue and concerns, and her descriptions of overnight camp activities (especially sailing and waterskiing) will strike a chord with readers.
Booklist

I took a seat in the boat and held tight to the mainsheet and tiller. Tammy unhooked the boat from the buoy and hopped on board. “Do you want to be the skipper or first mate?” I asked.

“Okay.” I scooted over so Tammy could hold the tiller, and I grasped the mainsheet. All of a sudden I felt the sail catch the wind, and we were on our way. We glided across Star Lake, not saying much to each other. I knew sometimes it was fine not to talk. Tammy and I had had plenty of times when being quiet together felt perfect. But this didn’t feel like one of those. It felt more like there was so much that we weren’t saying. That we couldn’t say. Like that I wished Brooke wasn’t at camp. And that I was afraid Tammy didn’t like me half as much as she used to. I knew I wouldn’t say any of that aloud. Because here we were, just the two of us in the sunset sailboat, and I wasn’t going to ruin the moment.

Q: Is this a true story?

A: No, but Jemma’s story is inspired by some of my real life experiences at Camp Birch Knoll in Phelps, Wisconsin. I designed Camp Star Lake to look and feel as much like CBK as possible. At Birch Knoll, there really is a Firelighter award, and I really had to learn the difference between “earning” it and “winning” it. I really once sailed in a race on a blustery day and nearly sunk the boat. I really had a crush on the water-ski instructor, and I really embarrassed myself once when, unbeknownst to me, I had a booger hanging out of my nose while riding in the boat with him. And the truest thing of all? I really love camp just as much as Jemma does.

Q: What motivated you to write this book, which is so different from Julia’s Kitchen?

A: Growing up, I loved going to overnight camp more than anything in the world. I knew I wanted to write about camp, but unfortunately, you can’t write a book with just a setting. You need a character and a plot! So that’s where the friendship story came into play. I wanted to explore the pain and growth that happens when you realize best friends forever doesn’t always mean forever. Sometimes it means best friends for now.

When a romantic relationship ends, there is usually some sort of official break up. But with platonic relationships, it’s more subtle. And sometimes, that makes it harder. Jemma struggles at camp because she feels the loss of her best friend drifting from her, but it’s never addressed. It’s never made clear. This kind of situation is a recipe for insecurity and heartbreak. I’ve experienced it. I’ve seen my daughter experience it. And I have to believe most people in the world experience it. It’s not pretty or fun, yet the wisdom that comes from learning to cherish friendships no matter how long they last, coupled with the strength gained from being able to let go and move on when the situation requires it, is a recipe for resiliency. And resiliency is a theme I’m very attracted to.

So even though Julia’s Kitchen and Jemma Hartman don’t seem to have much in common on the surface, if you look a little deeper you’ll find both stories are about loss and both are about resiliency.

Q: How do you come up with the names for your characters?

A: I sometimes like to name my characters after real people. The name Jemma Hartman comes from my sweet drycleaner, Jemma Jones, and my cousins, the Hartmans. Also, within the book, I included the names of a bunch of my camp friends as a way of honoring our time together. And because my daughter goes to Camp Birch Knoll now, I decided to use some of her camp friends for names, too.

Q: Is it possible to make new friends and keep the old?

A: I think so! It depends on the friend. Some friends are meant to be in your life forever. Others are temporary. But both kinds of friendships are valuable and should be treasured.