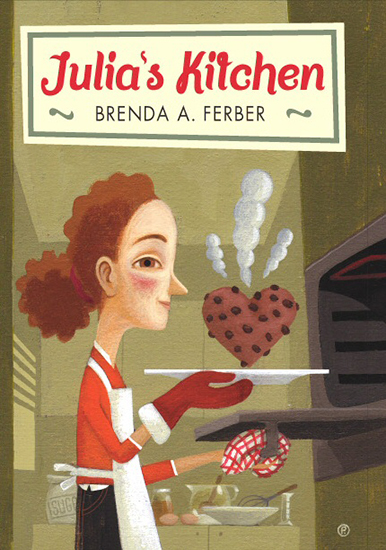 Julia’s Kitchen is the name eleven-year-old Cara Segal gave to her mother’s catering business. Cara loved to help Mom bake, especially when it came to licking spoons. Nothing tasted as good as Mom’s warm chocolate-chip cookies, except maybe the challah she made every Friday for the family’s Shabbat dinners.

But now Mom is gone. She and Janie, Cara’s little sister, died in a house fire while Cara was spending the night with her best friend, Marlee. Only Dad survived.

How did her father escape the fire? And why did God spare Cara and take the people most precious to her? As Cara struggles with her grief, she questions God’s role in her life, and for the first time her faith is shaken.

Dad is too stricken to talk, and after a while Marlee seems to run out of sympathy. It’s up to Cara to heal her heart and find a way to move on.

Brenda A. Ferber’s first novel, a study in loss, doubt, and acceptance, is also a hymn to life and a joyous tribute to the resiliency of the human spirit.

The emotions are real, the protagonist empathetic, and the resolution believable. Poignant.
—Kirkus Reviews, Starred Review
Real, raw emotion emanates from this affecting debut novel. A heartrending tale of loss and healing.
—Publishers Weekly
The novel’s brevity and honesty will appeal to both Jewish and non-Jewish girls.
School Library Journal

“The emotions are real, the protagonist empathetic, and the resolution believable. Poignant.”
—Kirkus Reviews, Starred Review

“Readers will appreciate the book’s poignant and sympathetic depiction of bereavement and its hopeful message of a legacy that can transcend separation.”
—The Bulletin of the Center for Children’s Books

“Touching and authentic… major themes about grief and healing are beautifully addressed in what turns out to be a powerful debut novel.”
—Booklist

“The novel’s brevity and honesty will appeal to both Jewish and non-Jewish girls.”
—School Library Journal

“Told with grace and humor, this story, with its focus on family and friendship, transcends its difficult content.”
—The Horn Book Guide

“Well-drawn, life-affirming characters and a point of view that emphasizes human resilience over despair.”
—Association of Jewish Libraries Newsletter

“Ferber writes with the ease and sensitivity of a veteran as she beautifully conveys Cara’s passage from grief and doubts about the existence of God to an understanding of what she must do to move on.”
—Jewish Woman Magazine

A: No, but we do have a few common traits. Even though I never experienced a fire or the loss of a close family member, I identify with parts of Cara. When I was a child, I worried the way Cara does. I worried about plane crashes, car crashes, divorce, death, everything. Nothing terrible ever happened to me, but that didn’t prevent me from worrying. I also felt very close to God. I felt we sort of worked in tandem. I worried, and he watched out for me. When I grew up, I realized all that worrying was a waste of energy. Even though bad things sometimes happen, worrying doesn’t change anything. I could make good choices in my life and hope for the best. I replaced fear with faith. I knew that God would be by my side in the good times and the bad.

Q: Where did you get the idea?

A: In 2001, we lived in Austin Texas. A house in my neighborhood burned down, and a father and son died in the fire. Every day I would drive past that burned out house, and I would think about how the surviving family members were coping. I imagined how I would feel if I were a young girl and my house burned down like that. I wondered how that would have changed my ideas about worrying and God. And so Julia’s Kitchen was born.

Q: Is it true that a fire can start from a toaster oven?

A: Yes, it’s true. Although it’s rare, there have been documented cases of fires starting from toaster ovens just the way it happened in Julia’s Kitchen. Any small appliances that have heating elements should be unplugged when not in use. But be sure to always grasp the plug, not the cord, when you are unplugging something. For other fire safety precautions visit the National Fire Prevention Association website.

Q: How long did it take you to write?

A: It took about 1 year to write and another six months to revise.

Q: Was it hard to find a publisher?

A: Actually, no! I submitted the manuscript to the Sydney Taylor Manuscript competition, and it won. Then I submitted it to my first choice publishing house, Farrar Straus & Giroux, and they bought it!

Q: Will you write a sequel?

A: No. But I will write other books!