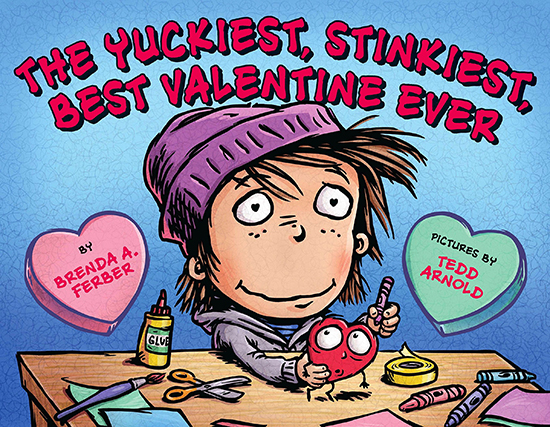 The Yuckiest, Stinkiest, Best Valentine Ever

Leon has a crush. A secret crush. A dreamy crush. A let-her-cut-in-line-at-the-water-fountain-crush. And he’s made the perfect valentine. But the valentine has other ideas. “Love is yucky, kid! Valentine’s Day is all about candy!” the card yells before leaping out the window and running away, leaving Leon to chase it across town, collecting interested kids along the way.

Saying “I love you” has never been so yucky or so sweet.

Q&A: Behind the bookDownload the activity kit

With its creative story line and upbeat writing, this picture book is a must for holiday collections.
—School Library Journal

Q: What motivated you to write this story?

A: One Valentine’s Day, my son Jacob came home from first grade and began sorting all the valentines he had received that day into two piles. I asked him what he was doing, and he told me, “I’m putting them in a good pile and a bad pile.”

Since he wasn’t even opening the cards, he couldn’t possibly be sorting them into his best friends vs. the other kids or even boys vs. girls. Frankly, I had no idea how he was determining which were the good ones. Finally, I asked him, “How do you know which ones go in which pile?”

“Duh, Mom,” he answered, not even looking up from his important work. “The good ones have candy attached.”

And of course, they did. Chocolate kisses, cherry lollipops, heart-shaped peanut butter cups… Jacob had absolutely no interest in the cards themselves. It was all about the candy.

Meanwhile, my other son, Sammy, in kindergarten at the time, loved Valentine’s Day because it was all about giving love, and that was his specialty. He doled out hugs, kisses, and I love yous all day long.

There could not be two more different boys, and I loved how they both found the joy in the holiday.

The next year, I was in charge of bringing a Valentine’s Day book to my daughter Faith’s second grade classroom party. I spent some time at the bookstore and the library, but none of the books jumped out at me. I kept remembering Jacob and Sammy’s reaction to Valentine’s Day from the year before, and I decided I would try to write a book that would appeal to them both. I turned Jacob into a valentine who thought love was yucky, and I turned Sammy into Leon, a hopeless romantic. Then I let them duke it out. The result was The Yuckiest, Stinkiest, Best Valentine Ever.

Q: What was it like working with Tedd Arnold?

A: Actually, writers and illustrators almost never have any contact during the creation of a book. Everything goes through the publisher. When my amazing editor, Kathy Dawson, suggested Tedd for the illustrations, I was thrilled because I’m a huge fan of his. His illustrations are both hilarious and heartwarming at the same time, and they raise my story to a whole other level. I love so many of the details he created, such as the hearts for Leon’s pupils, the tear in the romantic little girl’s eye, the way the teenager’s dialogue practically spills off the page, and of course every expression on the poor valentine’s face!

Q: Which is easier: writing a picture book or a novel?

A: They’re both hard, but I’d say it’s probably harder for me to write a picture book. Sometimes people look at picture books and think it looks pretty easy because they’re so short, but the truth is the opposite. It’s extremely challenging to tell a compelling, entertaining story in just a few words. This book actually took me longer to write and publish than either of my novels. Believe it or not, I spent about five years writing and revising this story, and it only contains around 700 words. Then, once a publisher bought it, it took another five years to be turned into a book. My twins were in second grade when I first came up with the idea, and now they are seniors in high school!

Q: How did you come up with the names for your characters?

A: If you turn the n upside down in Leon’s name, it looks a little bit like a v, right? And if you unscramble those letters, you can spell the word LOVE. That’s how he got his name. Zoey Maloney was a much harder character to name. I wanted something fun to say, so I tried out a whole bunch of names until I landed on one that seemed just right.

Q: Is Valentine’s Day about love or candy?